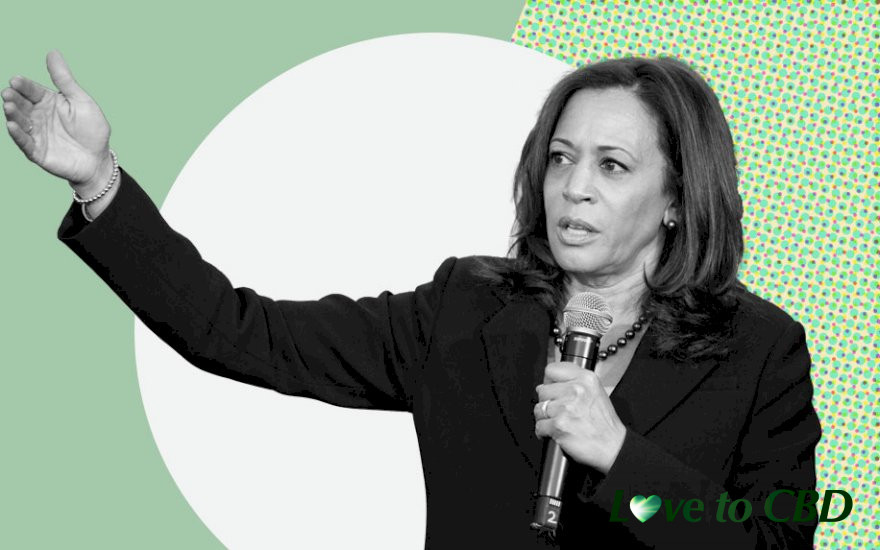 All this week, in anticipation of the third Democratic presidential primary debate (airing live on ABC on September 12th at 8 p.m. EST), we’ll be examining where the top presidential candidates stand on all things CBD and cannabis.

Among the field of candidates for the 2020 Democratic presidential nomination, few have made a turnaround on cannabis reform as striking as that of Kamala Harris. In a stark contrast from her days of vocal opposition to cannabis legalization while serving as California’s Attorney General, her recent record on cannabis-related issues as a senator and presidential candidate has been enough to earn her an “A” rating from the cannabis advocacy organization NORML.

When she added her signature to Cory Booker’s Marijuana Justice Act in February 2019, which was also supported by a number of other potential nominees, Harris issued an unequivocal statement supporting cannabis legalization.

“Right now in this country people are being arrested, being prosecuted, and end up spending time in jail or prison all because of their use of a drug that otherwise should be considered legal,” she wrote. “Making marijuana legal at the federal level is the smart thing to do, it’s the right thing to do. I know this as a former prosecutor and I know it as a senator.”

In July of this year, she enhanced her otherwise thin pro-cannabis record with a new bill aimed at decriminalization, the Marijuana Opportunity Reinvestment and Expungement (MORE) Act, which she crafted alongside House Judiciary Chair Jerry Nadler. The bill would decriminalize cannabis on the national level, expunge low-level cannabis convictions, and put a 5 percent tax on sales, which would go toward services and investment in “communities of color that have been disproportionately impacted by the War on Drugs.”

Harris has also boosted her cannabis profile through public comments, like this 2017 excerpt from a speech at a conference sponsored by liberal think tank Center for American Progress:

“Let me tell you what California needs, Jeff Sessions,” Harris said. “We need support in dealing with transnational criminal organizations, dealing with issues like human trafficking — not going after grandma’s medicinal marijuana. Leave her alone.”

Still, Harris Has a Complicated Past When It Comes to Cannabis

Despite her newfound support for reform, Harris’s anti-cannabis past keeps coming back to haunt her, most recently in the second Democratic debate televised on CNN. Fellow Democratic nominee Tulsi Gabbard criticized Harris on her about-face, saying that she is “deeply concerned about this record.”

Gabbard made her comments in response to a prompt from CNN moderator Anderson Cooper, which came after Harris criticized fellow candidate Joe Biden’s record on criminal justice reform. According to Gabbard, Harris was being opportunistic at best — and hypocritical at worst. “There are too many examples to cite,” Gabbard said, “but [Harris] put over 1,500 people in jail for marijuana violations and then laughed about it when she was asked if she ever smoked marijuana.”

In her time as a San Francisco district attorney, Harris prided herself on her tough stance on drugs. Her website claimed that she “held more Quality of Life offenders accountable, bringing 80 percent more misdemeanor cases to trial” — a category that, at the time, included simple cannabis possession — and that she “closed legal loopholes that were allowing drug dealers to escape prosecution.” She also claimed responsibility for increasing “convictions of drug dealers from 56 percent in 2003 to 74 percent in 2006.”

While running for state attorney general in 2010, Harris was asked about the cannabis legalization initiative on the same ballot. She called the measure a “flawed public policy,” and her campaign manager said Harris “supports the legal use of medicinal marijuana but does not support anything beyond that” and that she “believes that drug selling harms communities.”

In the 2014 race for reelection, Harris was asked about her opponent’s pro-legalization stance. Asked for her thoughts by a local news station, she paused for four seconds, nodded her head five times, laughed, and said, “He’s entitled to his opinion.”

Still, she had been a longtime supporter of medical cannabis and her state’s right to determine its own laws, and in 2015 she gave the first signs that her stance on recreational cannabis was softening as well. That year, she called for an end to “the federal ban on medical marijuana,” though her speech stopped short of suggesting total legalization, instead proposing the plant’s decriminalization and a rescheduling from Schedule I to Schedule II.

How To Relax Dogs And Cats This Fourth of July With CBD...

5 Ways To Relax This Hot Summer